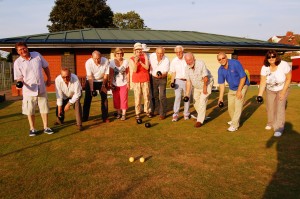 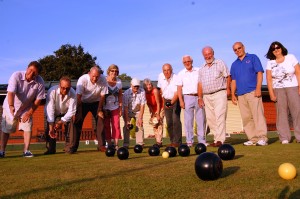 Lion John writes on behalf of Lion Duncan – Indeed the Vice Admiral would have been most impressed to see Brunel Lions in action on the Westbury rink.  Keith and Tom were elected skips (on the grounds that they said they knew how to play the game) and two competitions were contested in earnest.  Even the two attending pet dogs were mesmerised.

Technical terms were mentioned frequently and I got the strong feeling that this was done to impress.  Words like blockers, shot ball, hammer, bias, backhand draw, touchers, head, back bowl, jack, draw shot, potato bowl and skip were tossed about with gay abandon. But in the end nobody quite knew who had won or why.

As befitting such occasions we adjourned to the pub, the Vitoria in Chock Lane, for an excellent buffet, good beer and terrific company where, after much discussion, we still couldn’t work out who won.  As a winner, Sir Francis would not have been impressed!

A Young Persons Branch Club? Why Not? Jonathan Tullett Reports