Recent Posts
March 25, 2013 admin
Lion Mary writes – Convention! Annual Convention of District 105W held in Hereford 9th March 2013 Well.  I went to Convention.  As a new Lion, badged up last May, I wondered what I was letting myself in for when I was invited to go.  So we set off for Hereford early on a Saturday morning,  arriving in time for the 10am start.  What is Convention?  Well, I can answer that now.  It is a meeting of Lions from all over Wales, Wiltshire and the old Avon area. And what happened?  Well the key thing is that there is lots of socialising and meeting up with other Lions.  There is also lots of formal meetings all day.  It all started with a weird flag waving ceremony…may be a bit hanging over from a previous era?  There was a really nice bit where Lions who had died recently were remembered and of course we thought especially of Lion Peter Nuttall and Lion Clive Fletcher.  Then all the formalities kicked in and we were off,  under the guidance of Lion District Governor Harry from Keynsham.  He appeared charming and indeed was, but didn’t stand any nonsense!  We galloped through elections and myriad reports from every aspects of Lions work.  These reports were the most interesting bits.  Through these reports we can see what work other Lions are doing and how we can link up with them.  In fact we can all see these reports online on the Lions website anyway, so that is good. After a rather grim sandwich lunch, which the wise amongst us avoided, we had a great talk  from Dr Paul Whittaker of Music for the Deaf.  This charity helps 10 million people in the UK with hearing loss to enjoy the world of music.  Paul was moving and hilarious by turn, as he used his own deafness and musicality to inspire us. So, at the end of the day,  I decided that conference is about finding out more about Lions and meeting new Lion friends to work and have fun with.  Another time, to get the maximum benefit from these opportunities, I guess it would be more fun to stay overnight and join in more of the social side. Lion Mary         March 2013

Caring at Christmas – Good to be Involved – A Great Succees

January 12, 2014 admin Comments Off on Caring at Christmas – Good to be Involved – A Great Succees

March 25, 2013 admin Comments Off on A Moving Memorial 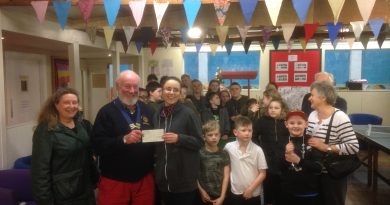 March 17, 2019 Morwenna Sanders Comments Off on Working together